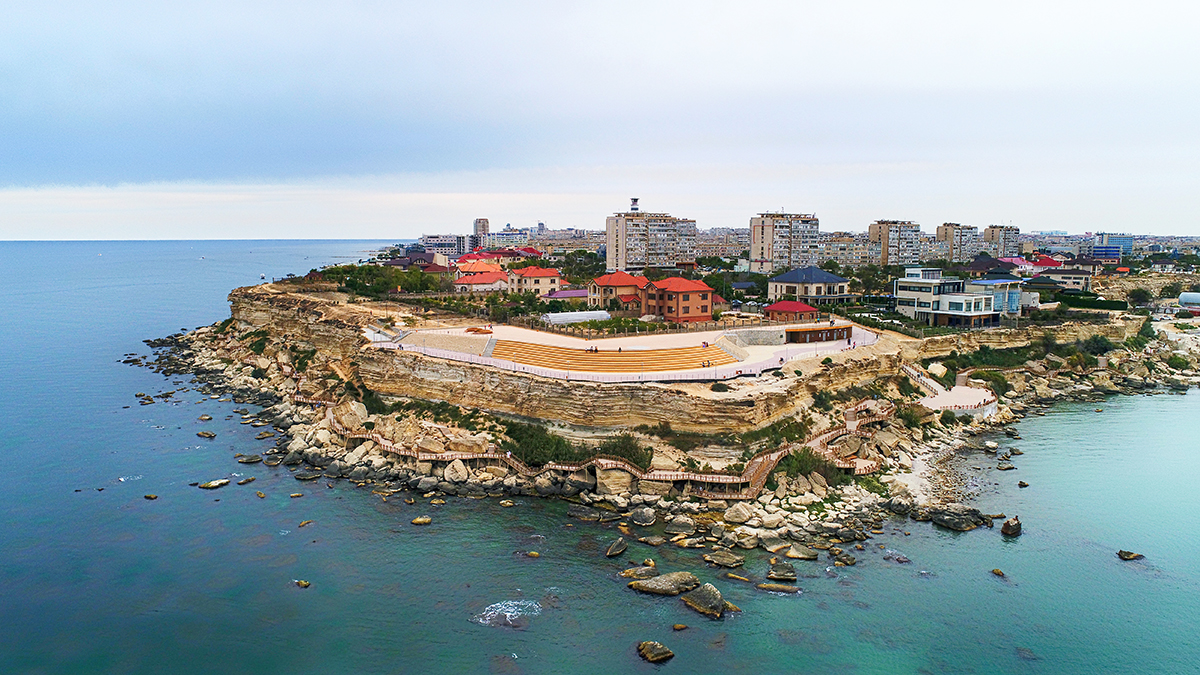 Mangystau oblast (in Kazakh Маңғыстау облысы, Mañğystau oblysy) is an area in the south-west of Kazakhstan, formerly called Mangyshlak oblast. It was formed on March 20, 1973, from the southern part of Guriyev oblast. In 1988, the region was abolished, restored in 1990 under the name of Mangystau. Aktau is the administrative center.

It is located east of the Caspian Sea on the Mangyshlak plateau (Mangystau), bordered in the northeast by Atyrau and Aktobe oblasts, in the south by Turkmenistan and in the east by the Republic of Karakalpakstan as part of Uzbekistan. It is an industrial region where 25% of Kazakhstan’s oil is extracted (almost 20 million tons), and the Aktau — Zhetybai —Uzen oil pipeline passes. In addition, in the Mangystau oblast there is the “sea gate” of Kazakhstan — Aktau city. The northern part with extensive salt marshes is located on the Caspian lowland, the southern part is occupied by the Mangystau Mountains (Otpan, 532 m), Ustyurt plateau, Mangyshlak and Kenderli-Kayasanskoye (in the south). Several depressions lie below sea level, including the lowest point in Kazakhstan — the Karagiye depression on the Mangyshlak peninsula — -132 m.

Most of the territory of the region is occupied by a sagebrush-saline desert with patches of shrubby vegetation on brown soils: the surface is partially covered with salt marshes, takyr white alkali and sands with extremely rare vegetation.

From the west, it is surrounded by the Caspian Sea — the coast protrudes in the west in the form of the Mangyshlak peninsula with deep gulfs of Dead Kultuk, Mangyshlak, Kazakhsky, Kenderli. There are Seal Islands in the Caspian Sea.

The climate is extremely continental and extremely arid. The average temperature in January is -7°C, in July +27°C (on some days the maximum temperature exceeds +40°C). About 100-150 mm/year of precipitation fall.

Archaeologists have found numerous Paleolithic monuments on the coast of Sarytash Bay, on the Tyubkaragan Peninsula and in the valleys of Shahbagata and Kumakape Rivers[3]. The Shakpak-ata site industry (proto levallua-acheul) on the territory of Fort-Shevchenko city administration has similarities with the tools of the Oldowan culture, the Shakpak-ata site industry (levallua-acheul I) corresponds to the middle Acheul.

There is a Neolithic settlement on Kulaly island in the Caspian Sea.

The Neolithic/Eneolithic era includes the Koskuduk I site on the shore of the Caspian Sea (the end of the V — the first half of the IV millennium BC), the industry of which has both archaic types of tools of the Oyukli culture and materials of the Shebir type of the Khvalyn culture. The human burial of the Eneolithic era at the Koskuduk I site is the oldest in Kazakhstan. In the V millennium BC, the Oyuklin culture was replaced by the Tuluz culture.

In the 1st millennium BC, the Great Silk Road from Khorezm and Khiva to Europe and the Middle East passed through the lands of Mangystau. On the Ustyurt plateau along this route there were fortresses, caravanserais, settlements of artisans, cattle breeders and hunters. Archaeological finds indicate that there was a fairly high standard of living in the fortresses and in these settlements. The Great Migration of peoples and the countless wars associated with it interrupted the Great Silk Road through Ustyurt, and the Mongol invasion finally buried and erased its attributes from the face of the earth.

The Altynkazgan religious and burial complex dates back to the VI—I centuries BC. The trade and craft settlement in the Karakabak stow was built by the Khorezmians in the I century BC.
Mangystau has moved to the very edge of the Eurasian ecumene for many centuries. The Mangyshlak peninsula was first mentioned in the IX century under the name Siyah-Kuh (“Black Mountain”) by the Arab geographer Al-Istakhri, who wrote: “I do not know of any other place in that region where anyone lives, except perhaps Siyah-Kuh, where a tribe of Turks lives; they recently settled there because of the enmity that arose between the Guzs and them.” Another mention of the existence of a settlement on the Mangyshlak peninsula is associated with the name of the Seljuk sultan, Alp-Arslan, who in 1065 forced the Kipchaks of the Mangyshlak fortress to resing them to his control.

Mangyshlak Fortress (Kaz. Mangystau), which existed in the X—XIII centuries as a major trading post, it gave its name to the entire peninsula; its exact location is unknown, presumably it was located on the site of the Kyzyl-Kala settlement (now archaeological research is being conducted there). The Kozgantas settlement dates back to the X—XIII centuries. The Horde port settlement of Ketikkala (Ketik-Kala) existed on the Mangyshlak peninsula in the XIV century.