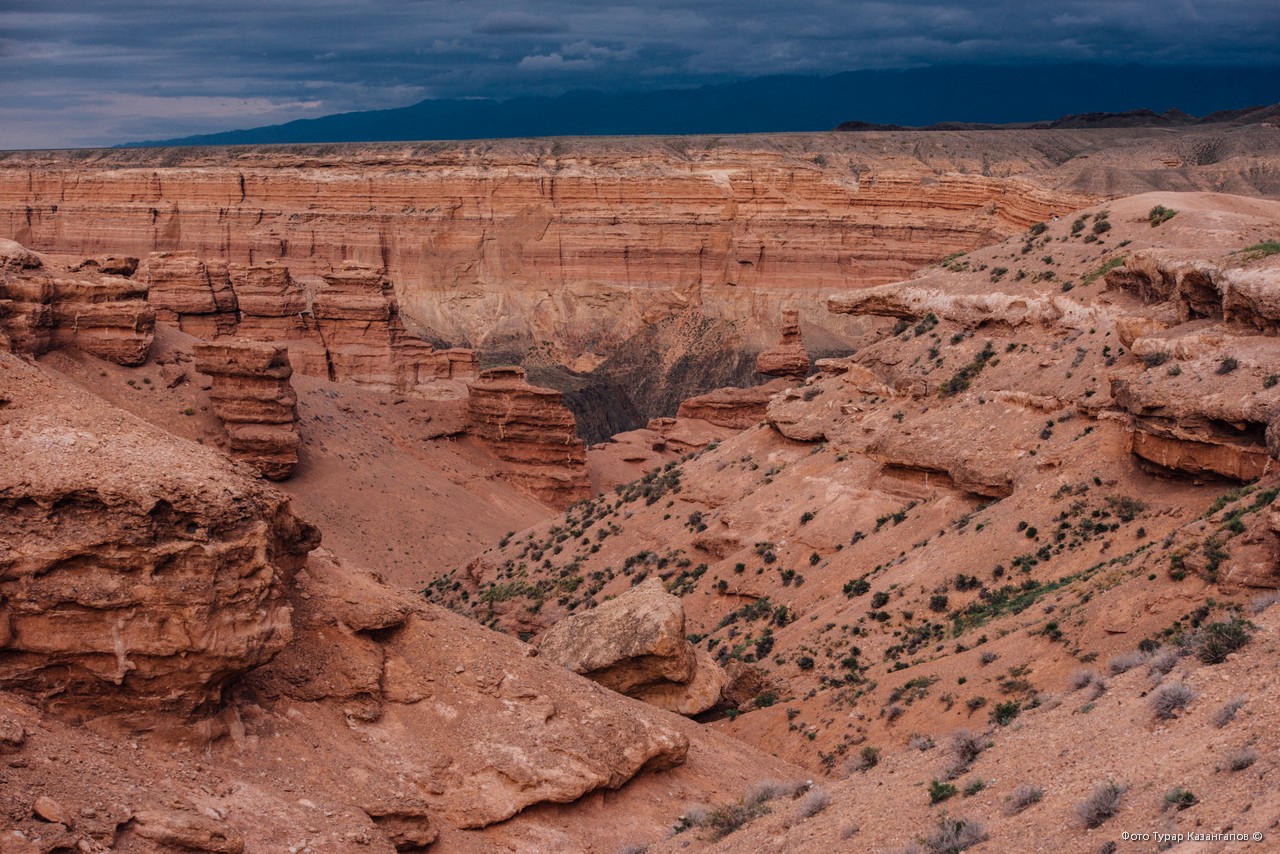 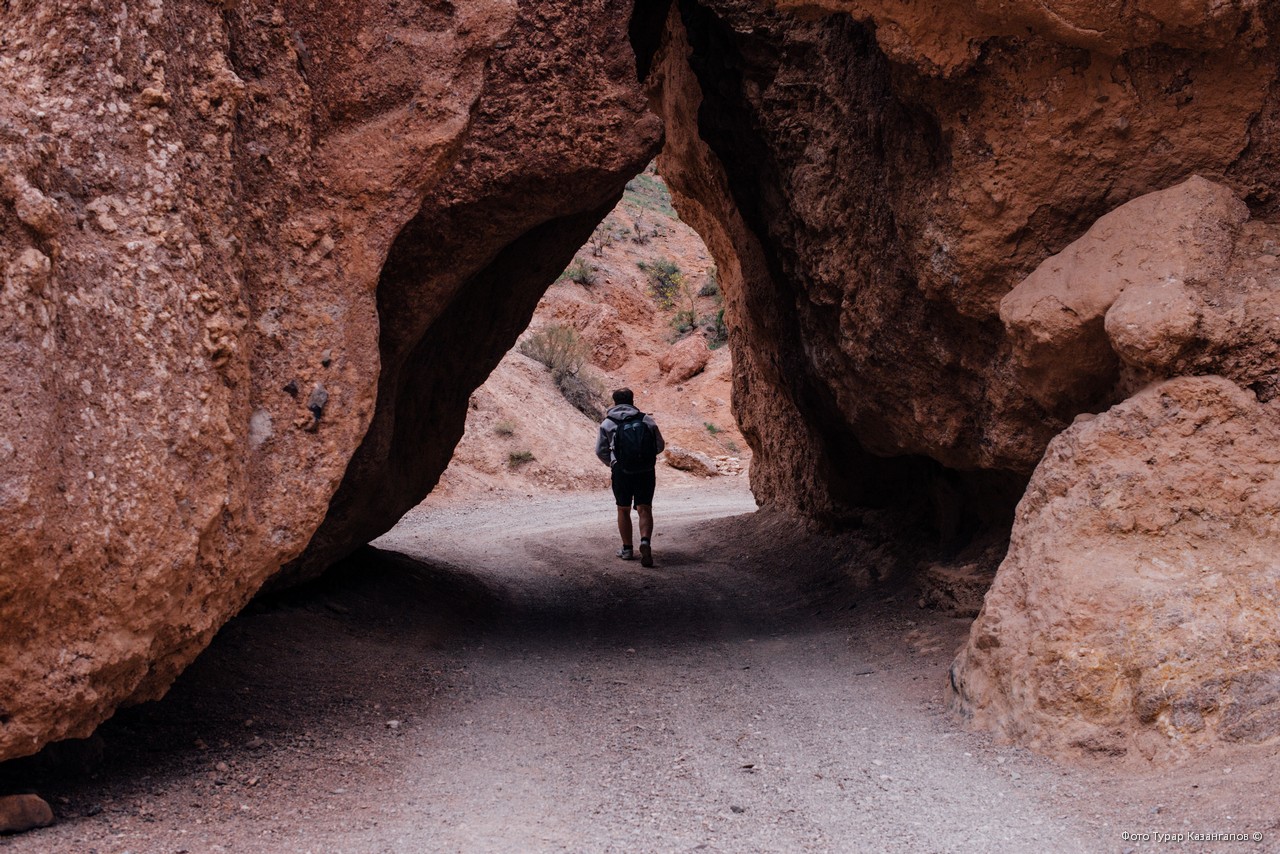 Charyn State National Natural Park (in Kazakh - Шарын мемлекеттік ұлттық табиғи паркі) is a natural territory, which has been granted the status of a national park and a natural park, located in the Republic of Kazakhstan, in Yenbekshikazakh, Kegen and Uigur districts of Almaty region. The park was established in 2004 according to Decree of the Government of the Republic of Kazakhstan of February 23, 2004, No.213. The Government of the Republic of Kazakhstan by Decree “On Some issues of Expansion of the Territory of the Charyn State National Natural Park State Institution” of February 06, 2009, No.121, the territory of the park was expanded from 93,150 hectares to 127,050 hectares.

According to the functional zoning on the territory of the park , the following protection regime is defined:

The Charyn River valley with dense floodplain forests and rocky gorges is rich in various species of animals and plants.
The visiting card of the flora of the Charyn National Park is the Sogdian ash. In the floodplain (tugai) forests, djida (silver loch), Ili barberry, lianas (clematis), chingil, tamarisk, kendyr grow. In the “Valley of castles” saxaul, zhuzgun, rosehip, seletryanka are common. In the vicinity of the Derevyannoye (Wooden) Lake there are many turang groves (multi-leaf poplar).

Mountain goats (teke) live on the steep cliffs, and birds of prey golden eagle and lamb (bearded) soar in the sky. In the Charyn canyon there are foxes, turtles, foot-and-mouth, steppe ribbon snake and numerous “cities” of the big gerbil. In the dense forests along the river there are wild boars, roe deer, hares, foxes, wolves, badgers, rock ptarmigans (partridges).
Boguty mountains are transformed in late spring and early June - the surface of the “red planet” is decorated with steppe greenery and lush flowering of desert plants.

On the territory of the national park there are 32 species of mammals, 18 species of herpetofauna, 4 species of amphibians, as well as more than 100 species of birds. The flora of the park is very rich and has about 1000 plant species, of which 51 plants are rare and endemic.

The park has 3 tourist routes, the length of which is 49 km:

Charyn River
The Charyn (Sharyn) River is a left tributary of the Ili River, the largest river of the Semirechye (Zhetysu). The length of the Charyn River is 255 km, counting from the confluence of the Kegen and Shalkodesu rivers. The Charyn River is so powerful that its huge delta pushes the Ili River by 18 km. The Charyn receives many tributaries from the northern slope of the Kungei Alatau ridge and, becoming a powerful river, it cuts through the Zhalanash valley and runs through a deep canyon. In the Zhalanash valley, the canyon reaches a depth of 300 meters. Then the river crosses a small Toraigyr rocky ridge and continues to run in a deep canyon, the depth of which reaches 500 meters. In this area, the Charyn receives the only major tributary, Temirlik.
Along the river there are tracts - Aktogai (White Forest), Kurtogai (Grave Forest), as well as White Mountains - outcrops of white clay, destitute of vegetation, on the eastern bank of the river. The White Mountains stretch to the east for several kilometers. Their rounded shapes with deep and narrow gorges form a complex of natural labyrinths.
Valley of Castles
At the exit of the Toraigyr ridge from the west, a 5-kilometer gorge called the Valley of Castles descends into Charyn. When they call the famous tourist object “Charyn Canyon”, they usually mean this deep beautiful gorge.
For many centuries, under the influence of heavy rains, light sand and pebble rocks were gradually washed out in this gorge, thereby deepening its bottom. More durable earth rocks, cemented with red clay, have created a unique landscape of bizarre shapes that resemble tall statues and ancient castles.

Boguty mountains (Bogety)
In the famous Soghet valley, where Kazakhs led by Raiymbek Batyr defeated the Dzungarian conquerors, the depth of the Charyn Canyon decreases, and in the area of the bridge to Chunju city, the Charyn River breaks out into the open. On the western side, the ancient low Boguty mountains (Bogety, Buguty) adjoin the river. They are called “Red Mountains” because of the many shades of red rocks. In places, the slopes of the Boguty mountains sparkle with salt crystals. The landscape of the mountains is so unusual that a person feels like he has landed on the Mars planet.

Ash Grove
The area of the Charyn River from the Boguty Mountains and almost to the delta is called Sarytogai (Yellow Forest). It is here that the floodplain (tugai) forest consists mainly of a unique tree - the Sogdian ash. This tree grows only in three places on earth, so it is also called relic ash. A significant array of Sogdian ash has been preserved to this day in the Ash Grove, which has been declared a natural monument since 1964. There are several trees in the grove, the age of which is estimated at 250-300 years. In height, such trees reach 25-30 meters, at the base of the trunk, on protruding roots, can accommodate up to 10 people.
At this point, the Charyn River is divided into several branches, along the banks of which a powerful tugai forest grows, in which you can easily get lost. There are wild boars, roe deer, hares, foxes, wolves.

Derevyannoye (Wooden) Lake
It flows into the Ili Charyn River with several arms, forming a huge delta. There is a beautiful Derevyannoye (Wooden) Lake on one of them. According to one version, many years ago, when the main channel of the Charyn River passed through this place, there was a relict ash forest here. Centuries-old accumulation of sand gradually dammed the river, and a lake was formed. And the ash forest remained at its bottom. Now the remains of this forest can be seen behind the huge sand dunes, which are the natural dam of the lake on the north side.
The Derevyannoye (Wooden) Lake is surrounded by reed thickets, which have practically swallowed up its entire western part. In recent years, the lake has been decreasing in size not only due to the active growth of reeds, but also due to the onset of the surrounding sand dunes. For many thousands of years, the Charyn River has brought and washed a significant amount of sand in this place, which has formed more than a dozen real sand mountains, whose height reaches 10-30 meters.landmark